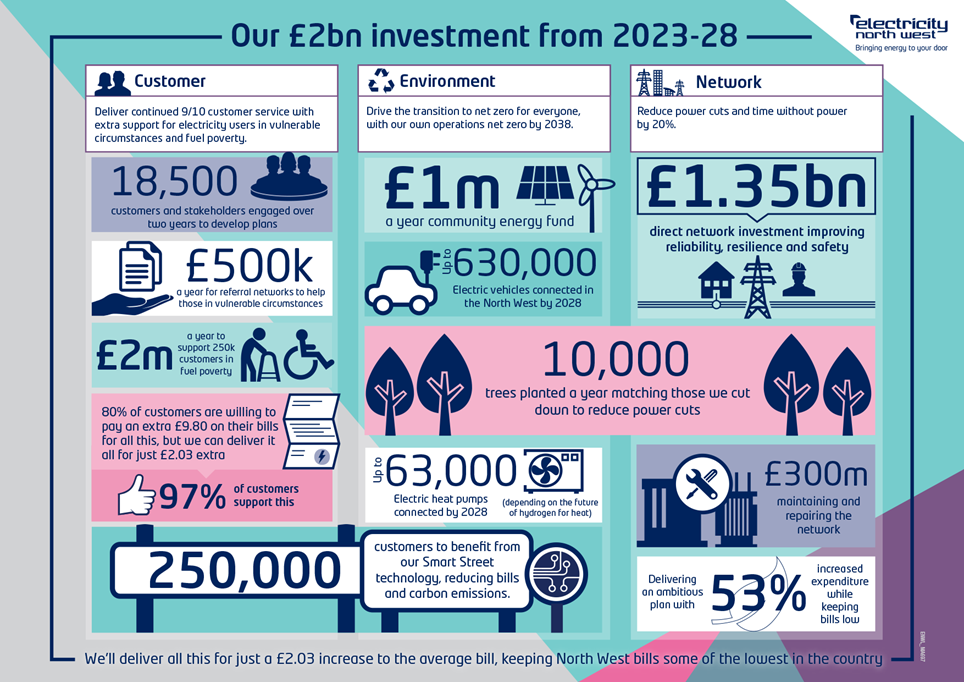 The company responsible for maintaining the north west’s electricity network has increased the amount it plans to invest during this decade following feedback from the public.

Electricity North West now intends to invest more than £2bn before 2028, an increase of more than £60m since it first published its draft plans in April.

The change comes after the company was one of only two network operators to publish an early draft of its business plan and ask residents, businesses and other stakeholders across the region for feedback.

All regional electricity network operators need to submit a draft of their business plan to the energy regulator, Ofgem, for the period between 2023 and 2028 by today (Thursday, July 1). Following its latest consultation, Electricity North West’s updated plan now commits to investing £2.033bn in the network in that time – a 53% increase in investment compared to the network’s previous business plan, which ran from 2015 – 2023, while adding just £2.03 to the average household’s annual energy bill.

As a result of this increased ambition and investment, the firm will plant 10,000 trees a year to replace those that are cut away from overhead power lines, turn 100 of its sites into havens for wildlife and roll out its innovative carbon-reducing Smart Street programme to cover a total of 250,000 properties across the region.

That is on top of its previously published plans to cut the number and duration of power cuts by 20%, go even further in protecting the network from storms and floods, and continue increasing the capacity of the network so it can accommodate the predicted rise in demand from lower-carbon technologies like electric vehicles and heating.

The new plan, which has been built on a two-year engagement programme that has seen the company speak to more than 18,500 people who live and work in the region, also commits to providing additional support for vulnerable customers so that nobody is left behind by the region’s shift to becoming a net zero carbon economy.

Peter Emery, chief executive of Electricity North West, said: “Publishing an early draft of our plan earlier this year was a new step for us and was very useful in securing even more valuable feedback into our plans for much of the next decade.

“Our challenge during that time is a huge one: achieving stretching net zero and environmental ambitions, while keeping bills low and making sure we don’t leave anybody behind so everyone can benefit.

“Yet it’s thanks to the feedback of thousands of people and organisations across the region, and a lot of work on innovation and efficiency, that we have been able to find a way of doing that while only increasing the average household bill by less than the price of one high street cup of coffee each year.”

Investment in the 57,000km of underground and overhead cables it takes to power the north west is paid for out of the energy bills of the region’s 2.4 million homes and businesses.

Over the next decade, demand on that network is set to intensify in line with the government’s target to cut carbon emissions by 68% by 2030 and become a net zero carbon economy by 2050, while locally Greater Manchester’s target is 2038, Lancashire’s is 2030 and Cumbria is 2037.

To understand how best to meet these goals, Electricity North West has spent the past two years consulting with more than 18,500 customers and stakeholders through a range of physical and virtual forums, a dedicated online community, surveys and other engagement events.

The draft plans are being published today in full to enable feedback from customers and stakeholders which Electricity North West is keen to receive. Anybody with an interest in the plan can contact Electricity North West with further feedback, ahead of submission of its final business plan to Ofgem on December 1, 2021.